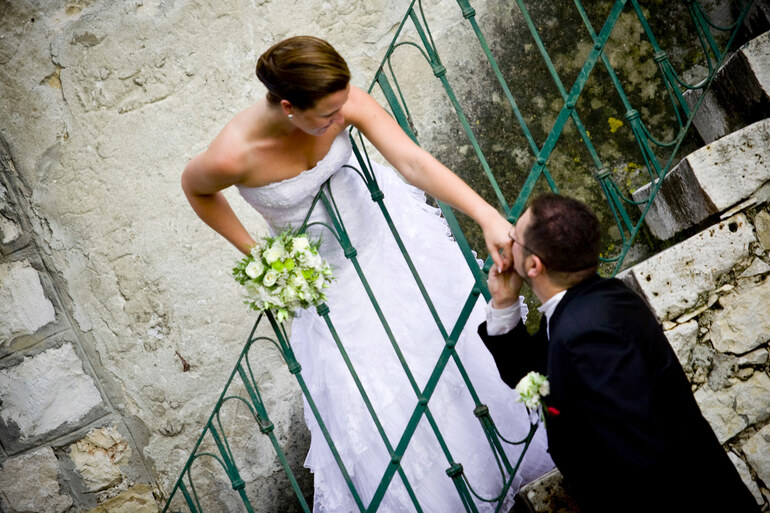 While I was preparing to write a story on food in Croatia, being a food lover and a travel enthusiast myself, I wanted it to be about an experience someone visiting the country doesn’t usually have the chance to be part of.

Well, a wedding in Dalmatia commonly involves a lot of eating and drinking, singing and dancing so I figure it might be a good starting point if you wanted to get acquainted with the customs and the gastronomy of the country.

Get the party started

Although there can be some variations like the addition of a meat or fish carpaccio, fish pate or something else, the standard cold starters served at a Dalmatian wedding are Dalmatian prosciutto, cheese, “French salad” and octopus salad. 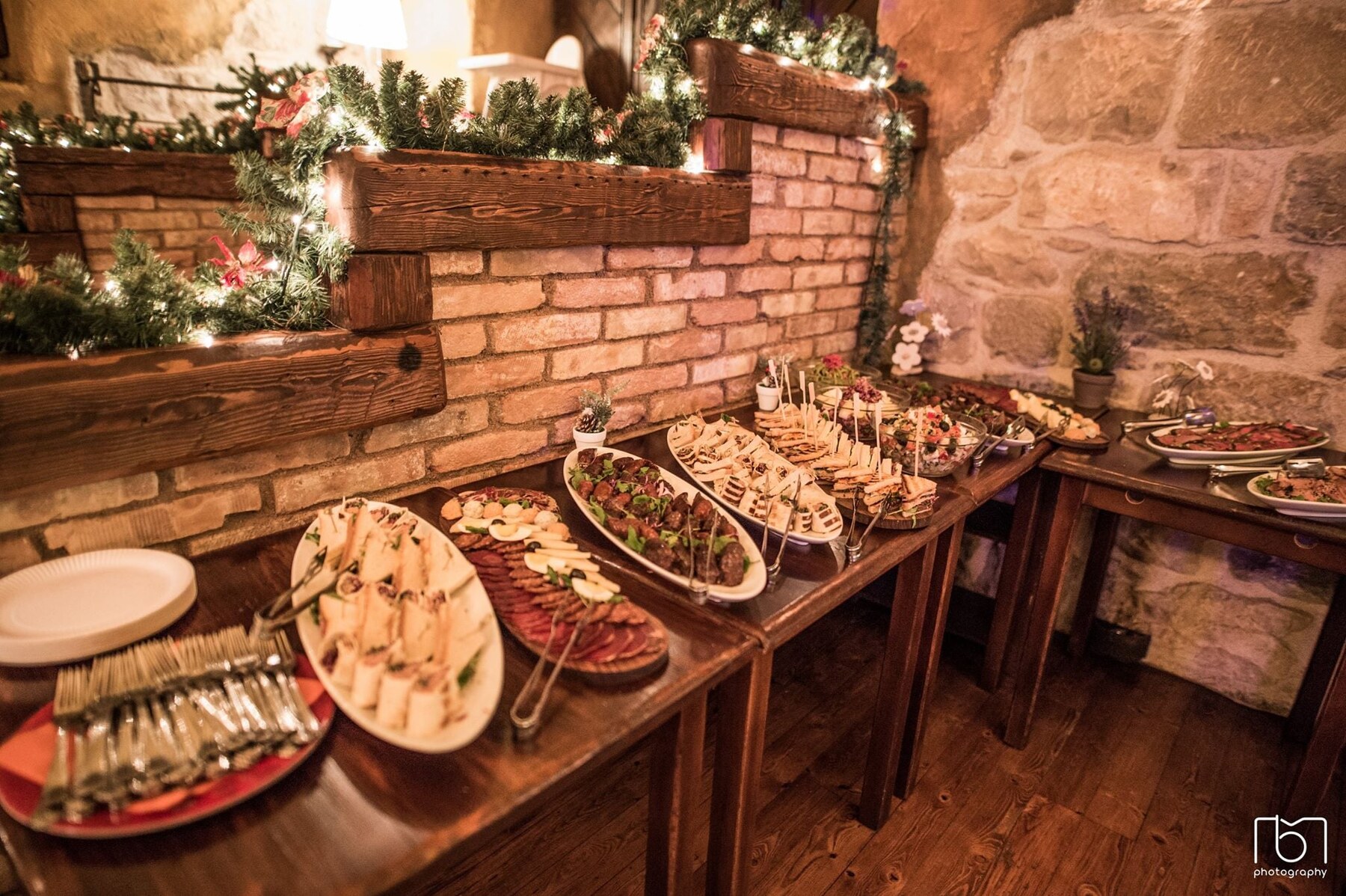 The two most renowned regions in Croatia for the production of prosciutto are Dalmatia and Istria. Unlike in Istria, in Dalmatia the salted and seasoned ham is smoked before being dry-cured in the wind (Bura) which gives it a distinctly smoky flavor. The best known prosciutto in Dalmatia comes from the town Drniš and is called “Drniški pršut” (Drniš prosciutto). Prove of how important this product is for the area is the “Prosciutto International Festival” held annually in Drniš.

Even though other, also tasty cheeses are usually served at weddings in Dalmatia, the one made on island Pag is probably best known around the world. Main reason, besides the quality, are the numerous awards won at specialized fairs and events around the world by cheese makers such as Gligora. What, besides the production process and all the love and attention that goes into it, makes this cheese different from others is the milk it is made from. Namely, sheep’s milk obtained from sheep grazing grass and aromatic herbs growing on the island, naturally sea-salted by the wind.

Tip: If you happen to come across cheese in olive oil, you should definitely consider trying it. 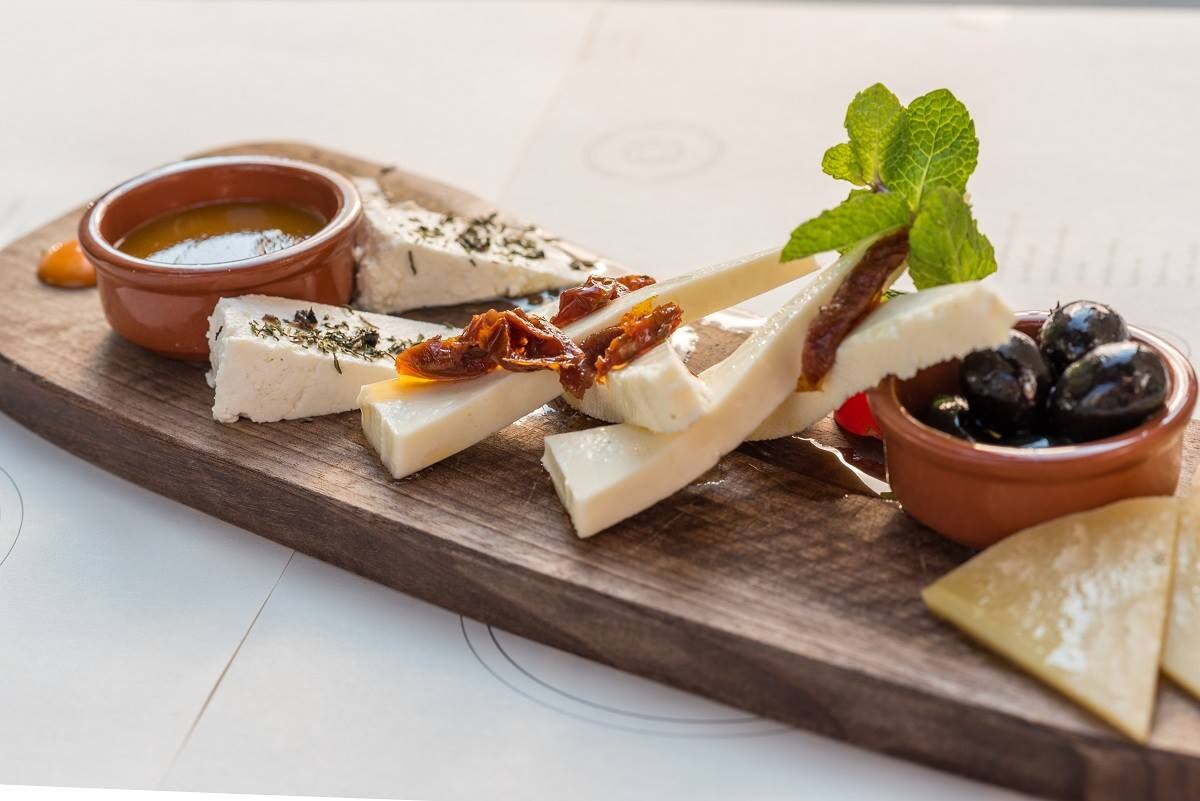 French salad is not a Croatian thing but a dish quite popular in the wider region. Basically it is a version of the Russian or Olivier salad and it probably got its name as a tribute to Lucien Olivier (chef of Belgian and French decent, inventor of the Russian salad) or to the French cuisine in general. With the basic recipe including potatoes, carrots, peas, pickles, eggs, mayonnaise and mustard it goes really well with prosciutto and cheese.

Tip: In case you decide to go for some fast food while in Split, you’ll probably be able to get French salad as a side dish with your sandwich.

Except for cakes, other dishes at a traditional Dalmatian wedding are mostly based either on meat or fish. As the “fish” starter, the most commonly served one is the octopus salad which is usually made from sliced cooked octopus, potatoes or tomatoes, onions or garlic, parsley and seasoned with salt, pepper, vinegar and olive oil. Light and refreshing this is a perfect snack for those hot summer days and with all the ingredients fresh and available on site, you’ll have no problem in getting it in most restaurants on the coast.

Today’s Croatia was, over the course of history, under the reign of various empires, kingdoms and states which had a great impact on the language and architecture but also on the county’s gastronomy. In Dalmatia, for example, very popular are various types of risotto. When attending a wedding in Dalmatia, after the cold starters and a round of dancing you’ll be served soup and/or probably a fish and a meat risotto. The two most popular ones are “Skradinski rižot” (Skradin risotto) and “crni rižot” (black risotto).

If you are lucky enough to be served Skradin risotto at a wedding, you shouldn’t miss the opportunity to taste it because it is not a regular veal risotto and definitely not usually served at weddings. It basically defines love for cooking because, besides the premium ingredients that are used, it takes a lot of passion and patience when preparing it as it has to be constantly stirred and cooked for hours. Originating from the small town of Skradin, located at the entrance to the Krka National Park, this meal embodies the beauty of the place it is coming from. 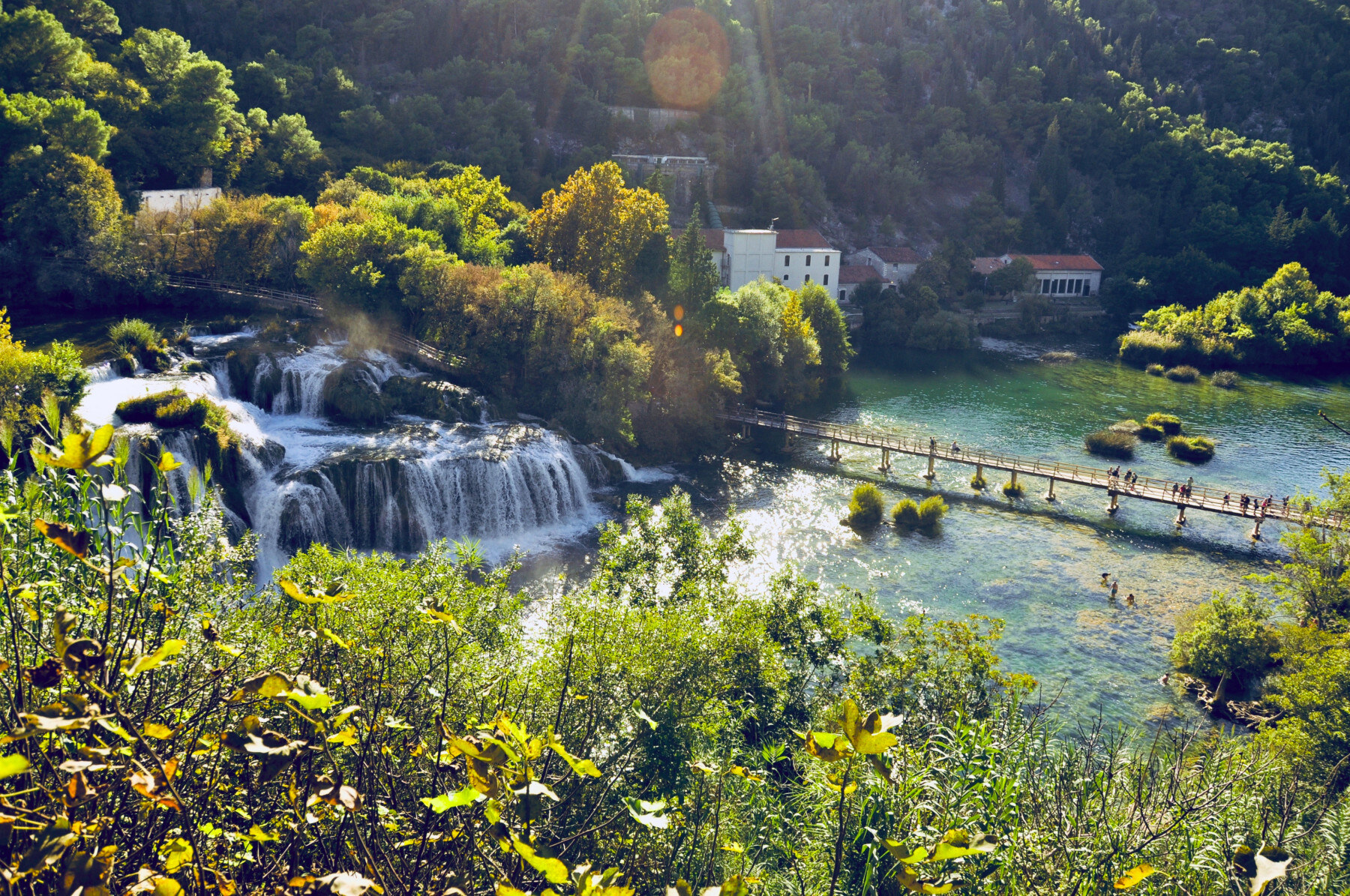 A very popular Croatian dish. The main ingredient for the preparation of this meal, not counting rice, is cuttlefish. During cooking the cuttlefish ink is used to color the rice black and that’s where this risotto gets its name. Besides rice and cuttlefish the recipe may also include various kinds of shellfish and squid. If you’ve already tasted black risotto and have liked it so much you’ve tried to make it on your own, at home, but didn’t manage to get the taste and the smell you remember, the small secret you might be missing is a drop of vinegar you have to add at the end, once the cooking is done.

People from island Brač are said to be "frugal" so they have their own way of preparing black risotto ... They cook the rice and, before serving, turn of the light off in the room. (Just a joke)

After some more dancing, drinking and singing you’ll probably be served pašticada. If it is a “proper” one and you are a meat lover, you are in for a treat. A proper one because, in order to make pašticada the way it is supposed to be made, it takes almost a whole day. Before the cooking even begins the beef, as the main ingredient, has to be marinated for at least 12 hours. The result of that and all ingredients used, including bacon and wine, is a tasty meal that melts in your mouth. Usually served with gnocchi or pasta, after this you’ll need a bit of an incentive to get back on the dance floor.

As the main course, before the cake, they'll probably treat you to some more meat. Lamb on a spit, lamb and/or veal “ispod peke” or, if there is a “fish” option, octopus “ispod peke”.

Although other types of meat are also used, lamb is still the go-to meat when celebrating some special event in Dalmatia. The two places in Dalmatia best known for lamb breeding are islands Brač and Pag. As with Pag cheese, animals breed there feed on aromatic herbs and grass naturally sea-salted by the wind which impacts on the taste and smell of the meat. The passion for lamb on island Brač can be best seen in "Brački vitalac”, a delicacy made from lamb (or goat) innards wrapped in lamb's sheath but the possibility of you tasting it on a wedding reception is even less then with Skradin risotto.

To prepare something “ispod peke” means to cook it in an open fireplace under a steel lid covered with hot ashes and embers. You can bake bread “ispod peke” or even pizza but, when it comes to meat and fish, usually you can choose from a lamb and/or veal or octopus peka. One of the best things about preparing a meal using a peka are the potatoes that are cooked together with the meat and other vegetables which soak all the juices released during the cooking and are sometimes even more tastier then the meat itself. 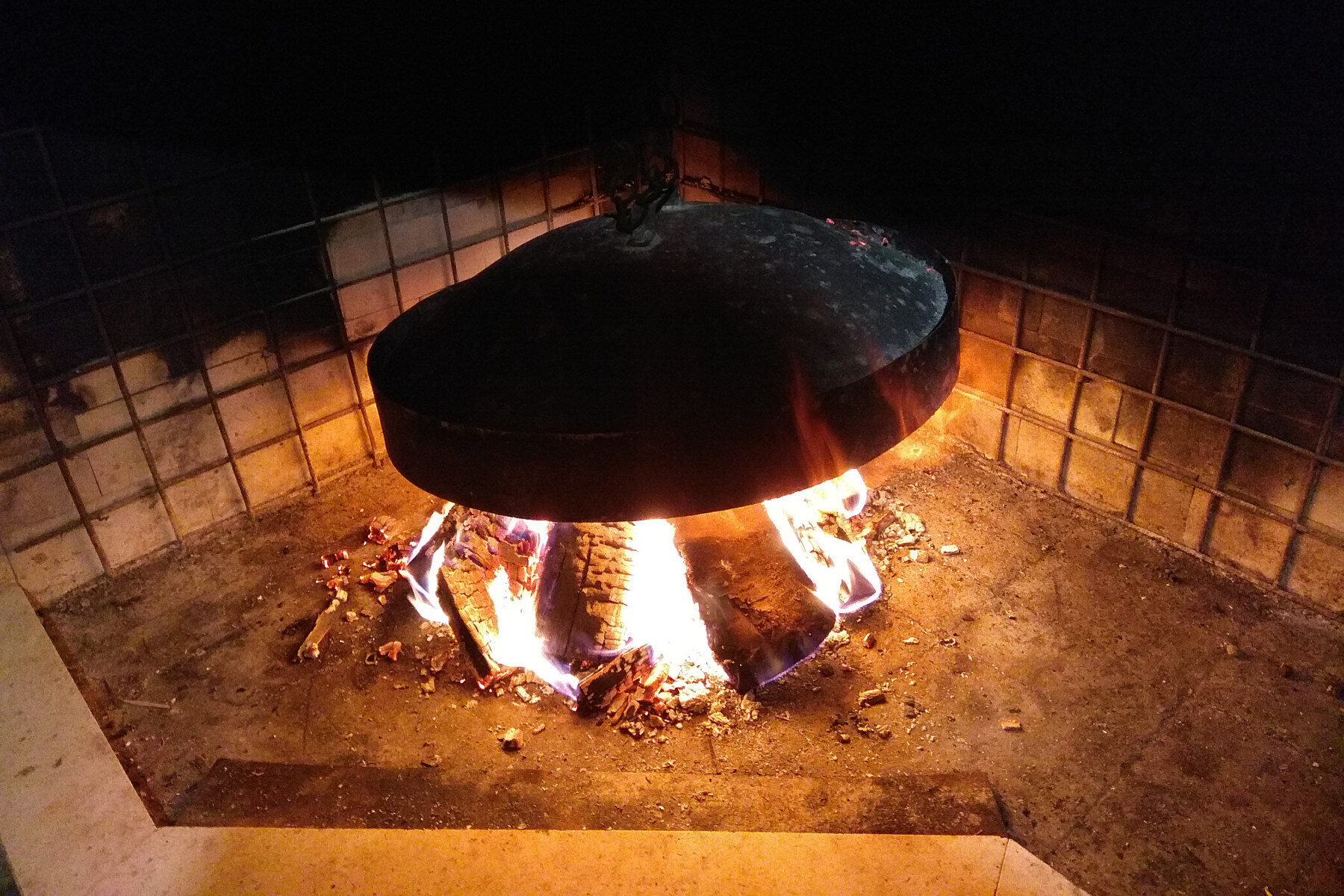 Once you’ve gone through the whole menu, it’s probably past midnight and its "cutting the cake" time. But don’t worry. With the main cake there are always a few smaller ones and a variety of pastries to satisfy your sweet tooth. After that, its singing and dancing till dawn. So, if you happen to get invited to a wedding in Dalmatia, you might not want to miss it.

P.S. Special thanx to Tisija and Toni for the photos and a fantastic meal my wife and I had at Konoba Matoni for our 10th wedding anniversary. Would I recommend the place? Well, to stick to the topic, we are still happily married.